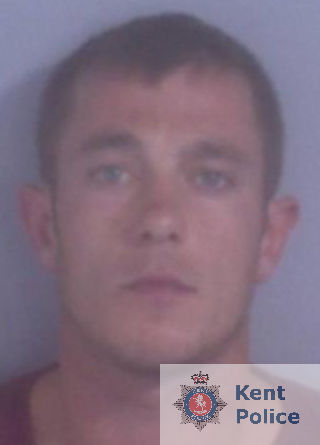 A Herne Bay man has been sentenced to two years and eight months in prison.

Christopher Godden, 28, who lives in the High Street admitted two counts of causing serious injury by dangerous driving when he appeared at Canterbury Crown Court yesterday (Friday, 3rd May 2019).

Just before midnight on Friday, 1st June 2018, Mr Godden was driving his grey Volkswagen Golf in Fordwich with two friends in the car - a 26-year-old woman and a 30-year-old man.

The passengers told police that the music in the car was very loud and Godden was driving at excessive speeds which made them feel uncomfortable. The 30-year-old passenger also told officers that he asked Godden to slow down.

As the car neared the junction of Moat Lane and High Street Godden lost control and the Volkswagen collided head-on with a house.

Godden ran away from the scene leaving his female friend seriously injured. She was taken to a London Hospital where her injuries were said to be both serious and life changing.

The 30-year-old passenger was treated at a local hospital for a serious injury.

On Saturday, 2nd June 2018, Godden attended Folkestone police station where he admitted he had been driving the vehicle and he was arrested. In interview he admitted cocaine use prior to the collision, he claimed he ran away from the scene as he was in shock.

Officer in charge of the case PC James Galbraith, said: ‘Godden not only put his passengers lives in danger with his thoughtless actions, he failed to even phone for an ambulance to get help for his seriously injured friend. Instead of coming to the aid of his friends he ran away, leaving them in considerable pain and in need of urgent medical assistance. His actions were beyond cowardly.

‘A blood sample was taken from Godden which tested positive for BZE, a metabolite of cocaine. He was three times over the prescribed limit for the drug and I believe this was a factor of the collision.

‘His victim will have to live with the consequences of his recklessness for the rest of her life. She is still receiving treatment and unfortunately she will not ever fully recover from the injuries she sustained.  I hope the custodial sentence will help her come to terms with what has happened and assist her in moving forward with her life.’

Godden was jailed for two-years and eight-months for one count of causing serious injury by dangerous driving, he was also jailed for 12-months for the second count and this will run concurrently with the sentence.