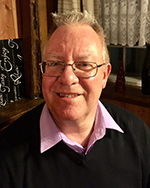 David was born in Faversham and has lived in Kent all his life, never straying further away than the City of Canterbury. Having always lived on this side of the river Medway, he’s not sure if this make him a ‘Man of Kent’ or a ‘Kentish Man’, however, he grew up with music - often being told off for trying to improvise jazz piano rather than study his practice piece!

David worked in music stores in London and was fortunate enough to see many of his musical idols, including Frank Sinatra. He spent several years presenting a show on hospital radio, both in London and here in Kent. He has written reviews of LP’s for various magazines and has compiled and written liner notes for several CD’s and LP’s.

He is also a dedicated  ‘Archers’ fan, and when not working can be seen being exercised by his two dogs

So, if you enjoy the music of Sinatra, Ella Fitzgerald, Henri Mancini, Dean Martin and you also enjoy a little Jazz and Bossa Nova, join David on Wednesday evenings between 7.00 - 9.00 pm. His show is called “Playing Favourites” and, as he says, ”That’s exactly what I do!”.